Ballad: A Gathering of Faerie 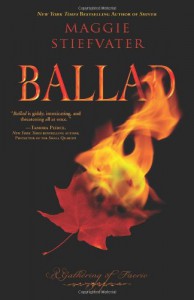 Sarcastic, slightly OCD James in this story really captured my heart. I loved his take on everything and the view into his world. If it wasn't for James being portrayed this way, I don't think I would have found the farie, Nuala's sarcasm and passage into compassion quite as interesting since they played off of one another so well.

Maggie Stiefvater's characters were well developed. Even those you consider side characters were developed to the point you also cared or hated them. Paul, his roomate and comic relief and Sullivan, his teacher and mentor were fleshed out that you really wanted them to be a part of James's life. Elenor, the Farie Queen, which it was told you were introducted into the last book was less fleshed out in this book, but you still didn't want to see her win.

My only criticism is with the character Dee. I know her story was in the first book, Lament, however, I would have liked to see more of here character dealing with the overwhelming circumstances within this story. Perhaps it could have been unsent e-mails instead of text messages. Just a bit more of what was going on with her side, her "fight", but not too much that it would have interfered with James's story.

This book I'm giving 4 stars, only because I now need to read Lament. :)
Tweet