One Night in Scotland (Hurst Amulet) 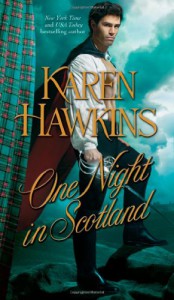 This book is part of the Hurst Amulet series. Even though the above suggests that it is the first book, I believe that the first book in the series is Much Ado About Marriage. It does introduce the Hurst Amulet first. I haven't read that one, so this series may be an offshoot of that book. I may have to pick it up to find out. ;)

Hmm, so I read the synopsis... scarred, dark Earl, foreboding personality hiding his past. A huge castle with an educated woman who will not bend to his will. To me this sounded a bit like Jane Eyre, so I HAD to read it. However, that is really where the similarities end. It really does not resemble that story at all. It's not necessarily a bad thing as this was a story in it's own right. In fact, the majority of the book was about Angus and Mary trying to outdo each other. This might have been frustrating as it seemed that the box itself held onto a mystery that begged to be solved. However, I actually got caught up in the relationship the two were trying to build together. It really was their story and the box will just have to wait for the next in the series.

My biggest complaint about this book was the sexy time. I can suspend belief to say... eh... okay, that COULD be comfortable... but not this time. There is NO way you can convince me that it would have been that romantic. Can't tell you more or I'll spoil a big part of the book. The fact that I told you they got together isn't really a spoiler since I believe it was obvious that they would have gotten together eventually even from the book's blurb. ;)

I give this book 3 1/2 stars. It was a fun read when you want something light. I loved that the fact the hero of the story was scarred and not perfect. I always love a story like that. I also liked that the heroine learned to be more of herself in the end. I recommend it to those that enjoy highland romances.
Tweet