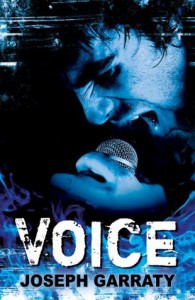 Ever hear the story about Robert Johnson? The legendary blues guitarist and singer in which a story that has become legend sold his soul to the devil to become the best in the world? Not only does this story reference that story but follows the beginnings of the legend. With the prologue we also know what is going to happen in the end, but even with these two known facts, it does not distract from the enjoyment of the book.

Johnny (formerly known as "John") wants fame and fortune and has chosen the medium of singing to gain it even though he does not put the work into his craft. His idea stemmed from his brother who is a drummer and loves music. His brother did put in the work and is a great drummer but his main goal is music. In order to gain the fame, Johnny puts together a great band, but the weak link is his voice. He finds a strange man who says he knows how to gain his fame. He ends up at a Robert Johnson crossroads and is told he can now sing. However, has he gained anything else?

We follow the band and Johnny to the inevitable conclusion, but the horror is what comes along the way and the unexpected parts in the end. What these parts are, I will not divulge... *evil laugh* (which is appropriate in this case) but I will say that if you are looking for a horror rock and roll book, you have found it.

I give this book 4 stars. Only thing missing is the duel at the end, but it isn't exactly the devil Johnny meets. Heh... that will have to suffice as the only tidbit I will reveal. ;)
Tweet