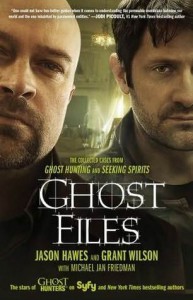 As the tiny blurb states, this is two books within one! This is stories from the popular show, Ghost Hunters on the Syfy channel. For those that either do not get the show or are unfamiliar with it, this is a group of people headed by Jason Hawes and Grant Wilson who investigate the paranormal. They do it in a way to prove the paranormal not just say everything is paranormal like you usually get on shows like this. They try to debunk claims of activity as much as possible. This is why I enjoy the show so much. They even have episodes where nothing is going on and they debunk everything. Therefore you tend to pay attention when they are left scratching their heads unable to figure out what is going on.

This book entails expanded stories on some of their shows. Not only does it explain what was missing in the episode, but it brings to light what they were thinking at the time. Some of my favorite cases were in this book. Especially the one in CO at the Stanley Hotel where the Shining by Stephen King was written. Even Steven claims to have had a paranormal experience there. (video added at my blog here)


There are also other stories that never made it to the show. Reasons usually were because people didn't want to be on camera. So all identity was hidden for these stories. What I also like about these guys is that they don't take money for it (even before the show started) and they do what they can to help out families just looking for answers. Even if the answers are mundane. In fact they even fixed a pipe for clients (they are Roto Rooter guys in their other life) to stop the banging they thought were ghosts.

I give this book 4 stars. It is a great compilation of their two books into one! Great idea and also a great book for someone who is a fan of the show. Even if you aren't familiar with it, you get a sense of what they do and why. Plus, even if you don't believe in any of it, I think you can read it for the entertainment value. Maybe you'll find something to wonder about. Who knows? Only thing I have left to say is... guys... smile! You are on the cover of your own book!
Tweet