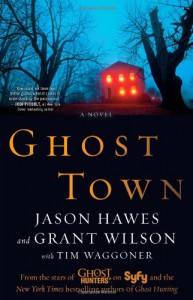 This is the second book in the series. The first being, Ghost Trackers. I enjoyed that one and so was excited to get this one. We follow the same characters we do in the first, so I would say to read that first book. You are able to then get the references placed in this book about their adventure in the last. You also get a better feel for the characters. You could read this one first, but like I said, the enjoyment would be more if read in order.

In this book we also get to see the relationship of Amber and Drew in a better light. Mostly because Amber is much more confident in herself. She also has a great sense of self that may throw a few since she was so broken in the first. However, this didn't bother me at all. I just enjoyed the more confident Amber.

Amber is also thrown by a reemergence of an old abusive boyfriend. One who is hellbent on making her pay for dumping him. Of course the paranormal gets involved and what was dangerous becomes even more harrowing. The friends have to figure out what is going on, what they are up against, and what to do before more people die. How are they able to fight something that can draw from illusion and you can't touch? It's an interesting conundrum.

I have to say that this adventure was fun. It wasn't scary to me (I'm a big chicken) because the scariest thing wasn't the Dark Lady (although she was a close second) but the abusive ex, Mitch. Probably because I can see that as more of a danger IRL than who or what the Dark Lady represents. Still, the adventure was suitably dark. I also have to say that I was pulled out of the sense of dark by Drew's psycho-analytical observances. It had a tendency to shed light into the darkness so it was much less scary than if he didn't do that. I must say, however, I did like his analysis so this really isn't a complaint. Just an observance myself. :) Still, it may bother some people who are looking for an extremely dark novel.

I think my biggest criticism of the book is the secondary characters. I have to admit, I was not a fan. Still, as long as the main characters are interesting, I really don't mind as much. I just hope that the next book finds these characters a bit more exciting and confident. Confidence in something evil makes it seem much scarier, IMO. Plus, it would be great to see more confident females as well.

I give this book 3 1/2 stars. I enjoyed the story but it wasn't as dark as I feel it was leaning toward. I enjoyed Amber and Drew's romance and I like the main characters. I think this is a continuing series so I guess I'll end with (and those that enjoy Ghost Hunters will recognize this:) "On to the next..." ;)
Tweet