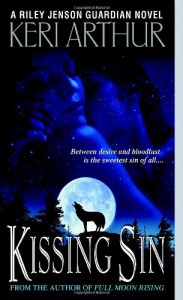 Kissing Sin is the second book in the Riley Jenson series. The first, "Full Moon Rising" I was not impressed by at all (my review). In this book, however, I felt was a much better. I think the main thing for me was that she wasn't justifying her casual sex ways by lame excuses, but rather just stated to just take me as I am, it's a part of me. That was a much better attitude and therefore did not get in the way of the action of the book. The action, which starts at the very beginning of the book and doesn't end until the last chapter.

Within this story, the main problem the directorate is trying to solve is the same as the one they were in the middle of in the first book. While still searching for clues, and saving her own life, Riley comes across Kade, a horse shifter. Their chemistry is immediate and interesting to say the least. Of course, Riley, isn't one to just attract one sexy guy, so we meet Kellen a alpha wolf whom really stirs Riley's interest. Now can we trust those two new love interests for Riley? Only time and more books into the series can tell.

Misha is also back in this book and we find out more and how deep he was into the mysterious lab the Directorate is investigating. We also find out why he seems determined to help Riley out as much as he is able. The end to this relationship is bittersweet and that is all I will say about that. ;)

Quinn also makes an appearance and finally decides to play a bigger part in Riley's life. To me, even if he isn't Riley's soul mate, I find him the most trustworthy of the bunch. But in the life of Riley who knows what will really go down in the end?

In total, I gave this book 3 1/2 stars. I liked it much better than the first. Perhaps the third book will be even better!
Tweet