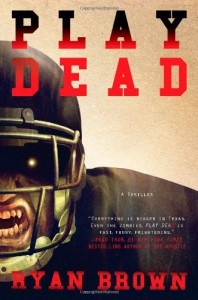 This is one entertaining book. I quickly became interested even in the football aspects of this book, mainly because he referenced two good QB players. Elway (hey, I am a die-hard Bronco's fan!) and Flutie (my second fave team is the Patriots). So, right there, I knew I would enjoy this book. I also love the cover of this book. Zombie football players. Heh... 101 jokes here people! Oh, and for those not that into football, do not worry. There really is a story around football more than the football game itself. So, yes, this book could have fallen flat and become something that tried to be too serious or too scary, but Ryan Brown pulls it off and gives us a very smart, funny, and interesting book. It also has a strong female lead in Savannah and a small bit of romance thrown into the mix. ;)

For those into the fear aspects of the book, yes there are some scary bits, but surprisingly I did not feel that it came from the zombies (aside from a wayward kitty) but from the rival team, the Badgers. It wasn't so scary it kept me up at night, but it was enough that I wouldn't want to drive into Elmwood at night. For those interested in the funny aspects of the story you are introduced to Mona. Mona, the rare gypsy lady who performs the magic, was one of those eccentric ladies who has a million cats. She is the scary lady everyone in town is afraid of, but in this case, she is the comic relief of the story. You'll just have to read the story to find out how. :D

So, do I recommend this book? Yes, I do. I give it 4 stars. It is even being made into a movie.
Tweet