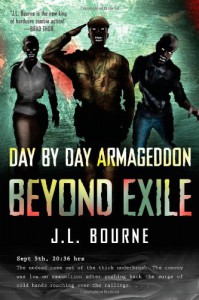 If you like your zombies sweet, awkward in a dorky way with a little paranormal love going on, you will be very disappointed. If however, you love your zombies to be mean, hungry, disgusting with a lot of war like images then you will love this book. This book has a lot of military imagery and it has to do with the main character who is, in fact a military marine man. It is he who has helped the remaining people to survive and his mission is to find as many survivors as he can.

This book is written like a diary and at first did not really capture my attention. In fact, I thought it was a bit redundant even in the action scenes when he rescues a grandmother and grandson. When he goes on a mission to gather supplies with some military men he has found alive then helicopter goes down. This is where the book really starts to shine. Surviving day by day, each day a new horror awaits. Eventually he almost comes to his demise if it wasn't for one man who had been shadowing him for a few days. They were both wary of each other with good cause until they could see they were the only two humans left in the area. A quick bond was formed and I loved that his new comrade was an old enemy. One who had become a terrorist, but upon seeing true terror could not see any use in deeming anyone left an enemy.

The book was a visual journey into survival and it looks like it is open to yet another book. This one was book 2 in this series and I had not read book 1. I didn't need to read it to really get into this book, but it made me curious as to what horrors were explored in the first. Book one is Day by Day Armageddon and apparently has quite a following. I feel that the people who enjoyed the last book will enjoy this one as well.

I give this book 3 1/2 stars. Like I said, if you like your zombies with lots of gore, you won't be disappointed. Just don't have a big meal before reading. :D