Sins of the Soul 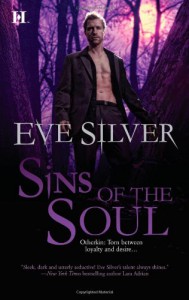 This one starts off shortly after the first books cliffhanger. In this one we are reading the romance between two reluctant characters, Alastor and Naphré. Two characters who find it hard to trust in another and in their surroundings. Both are bound by certain paranoia and a need for control. This draws them together but also keeps them at arms distance. So, quite a bit of the book is very frustrating, however it does make sense.

As fast paced as the first book was, I was expecting the same from this one as well. Unfortunately, the beginning did seem to drag on a bit. However, the last half of the book made it worthwhile. I really enjoyed that part of the book. These two characters were made for each other and it was fun to find out how simular they really were. How their lives took on different directions, but they seemed to come to simular conclusions.

I give this book 3 1/2 stars. I do recommend this book, but really suggest you read the first in the series before picking up this one. You get more clues as to what is going to happen within the story and I have a few ideas I'm not going to share. This book also concluded a bit better than the first, so I didn't end up shaking my fist. The next in the series, Sins of the Flesh, should prove to be very interesting indeed. I also love this book because so far all of the heroines in the stories are women of mixed race. I just wish they included them on the cover.
Tweet