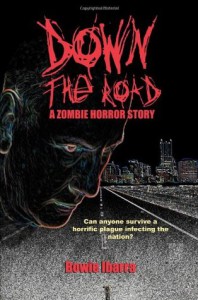 Pretty much this book starts out as most zombie stories. There is an unknown plague which animates the dead. A bite or scratch spreads the infection. In this story it is mostly told from George's POV. He sees what is coming and decides to try to reach his hometown where his mother and uncle still live. The government has taken over and put people in FEMA camps for "their own good". There is also a ban on living in private homes and owning weapons, even for safety. As things progress from bad to worse, many of the soldiers abandon posts and who is left are the corrupt and power hungry. FEMA camps become a war zone within itself where you not only have to worry about the guards, but the inmates as well.

As we follow George, we start to see the real monsters and they aren't the ones devouring the flesh of the living. As chaos reigns, gangs try to rule the weak. There are pockets of people sharing and holding out, but they too have to fight the rouge gangs and the government run FEMA soldiers as well. It is a story of true horror in a world we have already seen can happen. What is interesting is that we find that this book was written pre-Katrina and no one believed that anything FEMA run would be that incompetent. Now with this new edition, we find that what he had eerily predicted could come true if a zombie infestation would break out in the US. *shivers*

I give this book 3 stars. This is definitely an adult book. Not only is there violence but sex as well. If you like a good horror book and don't mind quite a bit of blood and guts then this book is for you! Just check your door before reading and make sure all windows are secure. Just in case. ;)
Tweet