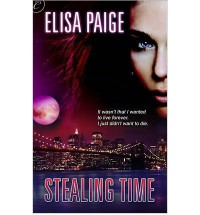 I found the plot of Evie becoming a vampire interesting. I loved her descriptions of pain and the absence of pain. Both descriptions were right on. So, I settled into what I thought was somewhat stereotypical but still enjoyable vampire fiction. However, when James starts taking Evie out on the town, they kept running into people who didn't like James and made him fight for everything. What I found problematic with this is that after a bit, you'd wondered why they kept going out and second no reasons were implicitly stated as to why James had so much problems with the others. If he was a target, why did he bring Evie into all of it? Also, why didn't he explain vampire politics after the first altercation?

The second half of the book we had an all out war between the Church's slayers and one vampire, Philippe. The actions of Philippe was explained as insanity, it didn't really explain how he then became so powerful. Also there is mention of a fae prince, but no much more was explained there. The second half of the book was like having another story thrown into the first. It might have been better to have all this action in another book in this series and finish the formulations of the first. That one of Evie being a new changeling vampire.

I give this book 2 1/2 stars. The characters were interesting, but the plot just needed a bit of editing and cohesion. The book also ends with a cliffhanger.
Tweet