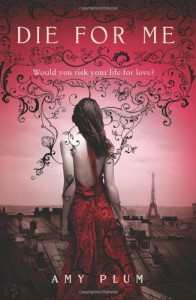 This book surprised me in the way it handled it's paranormal community. Now, let me get my evil laugh out of the way because I will not tell you exactly what that paranormal community entails. *EVIL LAUGH* I had an idea going into this book, but was wrong. So, I enjoyed this book mostly because of that fact. Made me more curious and wanting to know more.

As far as Kate, our heroine, I did enjoy her character for most of the book. Morose and grieving for their parents both siblings, Kate and Georgia, try to start over in Paris from America. Kate tries to lose herself in books to cope, and Georgia tries to party the pain away. Neither is wholly successful, but are doing the best they can. After getting booted out of the house, Kate tries to go to a café to read. At least she is among the living. In that first visit her eyes lock onto a enigmatic group of guys but becomes interested in one in particular. They do meet and things do not go well. Vincent manages to insult her at every turn, but he is loathe to give up. He finally tries again, but this time with a bit of honesty and they become friends and then each other's romantic interests.

Well, secrets get revealed and problems ensue. and our couple is torn apart. Both pine for each other even though they have only known each other for a little time. Now, I know people who don't like insta-romances may scoff at it, but it didn't bother me. Both characters are emotionally damaged as well as emotionally mature. How does that work? Well, I think it would explain the intense feelings, but it was tempered by wanting to do the right thing for themselves as well as each other.

I admit, however, by the end of the book Kate does something that makes me not like her. Again, I cannot reveal exactly what that is, but I do suspect my main complaint will be solved later in this series. Other than that one thing, she was a strong and mature character for this book.

I give this book 4 stars. It was an interesting take on the paranormal community. It was unique and refreshing in that aspect.
Tweet