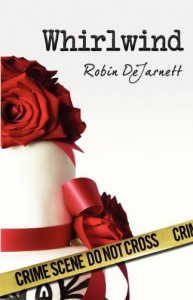 This book is a sweet contemporary romance with a bit of action thrown in for good measure. Melissa is a interesting character. In some ways quite strong, in others quite fragile. She can hold her own with the boys but does not think she is dating material, since none of the "boys" have ever asked her out. However, when she meets Jason, her best friend's brother, that view comes into question. Jason is smexy, sweet, and very romantic. Although they had fun on-line for a brief moment, it takes Melissa a while to figure out she is Jason's match. In fact she is so worried about the ending of the relationship, she almost ruins the present.

Melissa also has a great supporting cast of friends. People who will be there and back her in any decision she makes. Jason fits into this group like he was there all along which only makes her fret more about never seeing him again. Yes, there were times when I could have hit her upside the head (thank you Bender Bending Rodriguez for that phrase in my head) when she worried so much, but in the end it does make sense. There is an epiphany that comes to all readers as to why she is this way. I'm not telling you if she gets it *evil laugh* but at least it is there for the rest of us to make sense of her behavior.

I also should mention that throughout the book there is a looming dark figure we know as "Ron" who decides that Melissa should be his next victim. His twisted brain make for a good villain and there is a scene that is quite heart pumping. Hopefully our couple survives it, since you know I'm not telling. Wait for it... *evil laugh*

Oh I give this book 3 1/2 stars. It's a fun contemporary romance that is great for the summer months. Plus, who can deny a character named Melissa? Seriously who??? ;) Although I'm still waiting for my Jason to come, you will love his sweet and romantic side.
Tweet