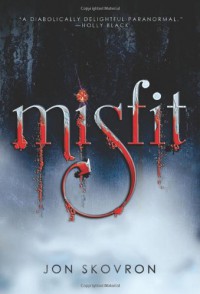 Since I love mythology of all cultures, I really enjoyed this book. It encompasses current religious mythology with those of the pagan mythology. I found this fascinating and quite surprising within a YA book. And within this weaving of mythologies we find things we had been taught aren't quite true. Not only that, but we are left to wonder exactly what is the truth for us humans. I found that delicious. ;)

Now most of this book revolves around a person who has been brought up Catholic as Jael attends several Catholic schools during her childhood. So, therefore, a demon is simply a creature with mythological magical powers and at times were deemed gods by the masses. In other words, any creature with power that directly influenced people good or bad within a pagan context would be classified as demon. This, of course, troubles Jael as she now has to learn new definitions as what she is and who she is once she claims her demon powers. That growth was frustrating and interesting at the same time. In some ways she is a typical teen, selfish because the world revolves around her. However, when she finds herself with the world really revolving around her, she drops the selfish act and finds true independence. She is not the only one that grows through her transformation. Her father, once seen as selfish himself, drops his pretense and becomes the father he should have been from the beginning.

However, having said that, I wouldn't judge them harshly in the beginning.

Would you be able to devote your life to saving the physical life of the one person that matters to you and have energy left to parent a child? Survival would be your focus. Plus, how could we blame Jael? Knowing nothing of her mother than she was a demoness who died. Having a father who is constantly looking over his shoulder he becomes an absent parent? Pretty tough stuff to deal with if you were a typical teen. Oh and add to this the fact that you are running from some powerful demon who wants you dead...

My only complaint was Hell. Yep, THE hell. Since it was a blending of mythologies from several cultures, I would have like it to reflect that more earnestly. Instead of a underground cave, we could be presented with several versions of the afterlife with or without human entities. The Elysian fields, for instance, would be lush and beautiful. However, this is just an introduction to the series and perhaps that dimension will open up more for the reader as we get further into Jael's adventures.

I give this book 4 1/2 stars. I was looking for something different and I think I found it within this book. If you don't mind the blending of pagan and Catholic mythologies, enjoy great complimentary secondary characters and are wanting something dark to read, I suggest you pick up this book. Adults as well as older YA readers will enjoy it.
Tweet