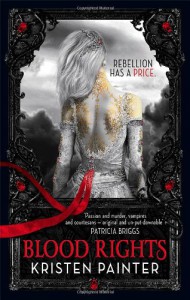 I really enjoyed the world created within this story. The vampires have different levels of power and being. They are part of the otherworld hidden from the humans. Noble vampires who belong to the most notorious "houses" and are connected to human's bloody history. They are also the kind of vampire that Chrysabelle is most familar. She is a comarré who has powerful blood which feeds only those that can pay for her service. She is a blood servant and her physiology has been changed to be a powerful donor. The world she lives has lots of rules where the nobel vampires are her better and the better of all humans.

This world holds a lot of information and lore that can easily become too complex. Luckily, I really didn't have a problem figuring out how things worked, but I do admit it took me a moment to figure out who was who. By the time she meets Mal (Malkolm) on his territory, I had most of it worked out and then relaxed and enjoyed the ride of the story. This is where it really started to get interesting. In fact I thought from that point it might go the way of a total PNR, but the twists and turns in this book didn't make it so. In fact, the twists kept me guessing as to which way the story would end.

I also loved the secondary characters. Even though we only really get a glimpse of who they are and why they are involved, you find yourself wanting to learn even more about them. You become excited for the next novel since you know (and hope) that they will be there to continue the adventure with Chrysabelle.

Ah but what else can I say without spoiling anything? That is what makes this a hard review to write. There is so much complexity within this book that to say one thing might spoil another. Yet, in the complexity there is order so you don't get lost. There are important aspects within like loyalty, personal rights, honor, love, and finding yourself. All these aspects are there but yet none are solved for our characters as to what it means personally to them nor if they achieved it within. Ah, but there I go, almost saying too much.

I give this book 4 1/2 stars. This book leans hard toward fantasy but and there is a possible romance in the future. There is no cliffie, but yet things unsolved that makes you crave the next book which luckily isn't too far away.
Tweet