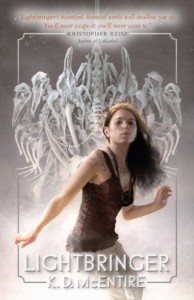 I have to say I really enjoyed this book. It is a story that is a mishmash of Peter Pan and Wendy. Just trying to figure out who was who made me smile. Plus, the story itself was strange and unusual which also grabbed my attention (yes, I'll say it... because I myself, am strange and unusual!... lol).

I did enjoy many of the characters, mainly Wendy, Piotr, and Eddie. They were fully fleshed out and interesting to read. Some of the secondary characters, particularly the other "riders" who help the young spirits felt flat to me. Lily was the best fleshed out one (yes, just like Lily in Peter Pan) and she was as wise as she usually is when her character gets personality. Even so, I still would have liked to have been able to grasp more about her personality.

The mystery that surrounds Wendy and her mom as well as what happens to the "Lost"fill this book with intrigue. I did figure out the biggest mystery quite soon, but that did not spoil the hows and whys you learn at the end. I found that quite interesting and fun. I also liked the way Wendy grows and finally learns to think for herself, even though that process was anything but gentle.

I give this book 4 stars. I think if you enjoy a twisted mystery and don't mind the frustration that comes with people feeling their way in the dark toward the light, I feel you will enjoy this alternate Peter Pan tale.
Tweet