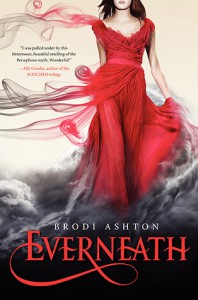 I really expected a Persephone and Hades tale with this book. It did have aspects of that mythology, but it really was connected to another Greek myth. I was disappointed at first, but I have to say the plot and the characters kept me from staying that way.

What I would say that this book is really a question about suicide. It is like answering what would happen if you could delete all the pain that overwhelms you, what would that be like? How would it leave you? What would it do to the people left behind? Now, even though this is a very serious and dark subject, the answers to these questions actually don't come off as dark as the question. By weaving it through a myth and allowing Nikki to actually come back and face the consequences of her decision she is allowed a second chance to change and see what she did not before. However, even though this sounds like a great way to avoid the more severe consequences of her decision, it does not. In fact, the price she must pay is steep and she only has a limited time to do what is right before oblivion.

I will warn you thought that this book actually starts of very slow and it is hard to connect with Nikki. It makes sense though. She comes back from the Everneath and she is a shell of herself. She cannot connect to who she is so how could we? As long as you remember that, I think you will find yourself wanting to read further and enjoy the journey of Nikki into becoming a whole person once again.

I give this book 4 1/2 stars. I think the ending will tear at you, but I also think it was the right ending. There is a thread that opens up for the next book but it isn't a cliffie.
Tweet