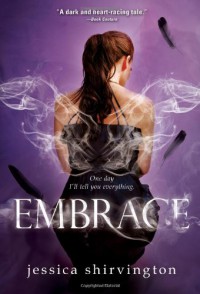 I've always been fascinated by all mythology. I remember a poster a friend of mine had that broke down the ranking and hierarchy of the Hebrew angel mythology. I remember how complex and beautiful it looked. This book takes a small portion of that mythology and weaves it into a world where all exiled angels are dangerous and corrupt. It doesn't matter if they come from the light or the dark. In fact the book tries to put those assumptions into question. This I liked immensely. Also, for those that shy away from books like this because you fear it may be preachy, do not worry. It does not come across that way at all even though some chapters start with a bible quote. It is only to set the stage for the chapter, not the religion.

Now although I enjoyed some of the myth play, I have to admit it also felt incomplete. Answers eluded me and I would have liked it fleshed out more. Those things may be solved in the coming books, but might frustrate some of us in this first book. Also, you are left to question some of the actions of the ordinary folk. I didn't understand her father who was absent throughout most of the book, but turns up later very interested in her life. I did love her best friend but she also confused me a bit. She seemed to have less trouble about the whole suddenly an angel thing than Violet.

Oh, I do have to mention the suitors that Violet has. One is Lincoln. He was a nice guy. Great guy, but I honestly didn't connect with him well in this story, but then he wasn't in much of the book. However, Phoenix. *sigh* Bad, bad, bad angel in such a good way. LOL Although you knew he was bad for Violet, you knew he was playing her somehow... and yet I cheered for him. I wanted him to win. He had so much more depth and layers to his character than Lincoln that I think I'll be cheering for him in the next book. :D

I give this angel book 3 1/2 stars. I really enjoyed the mythology despite my questions but I am aware this is part of a series. I'm hoping those lingering questions will be better answered in the next 2 books. I also enjoyed the Violet's adventure to learning who she is... and Phoenix. ;) I think, though, I would have liked her "normal" relationships to have been stronger. More fleshed out. I think it would have made her character stand out more. It would have made Violet more believable to me.
Tweet