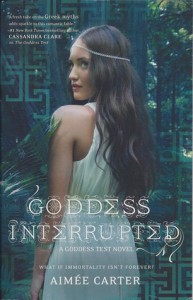 I really enjoyed book 1 of this adventure. Hades has been one of my favorite characters to have remake stories. There is something about the brooding dark character that seems to have so much possibilities and possible depth. In this story, however, I did find Henry (Hades) a bit lacking in depth. In fact he ticked me off.

Kate was also not the heroine we met in book 1, The Goddess Test. Very unsure of how she fits into Henry's heart was a constant worry. Despite the number of times she tried to engage Henry in a discussion he avoided it and her. She even became clear in exactly what she needed and again, Henry denied her simple knowledge as to how he felt. Nothing in what she was asking was too much and I felt she was actually brave in acknowledging and asking for what she needed. How many adults do that? Henry needed a boot and everyone else telling her to just accept it and not ask for what she needed also needed the boot. I'm glad she did insist and ignored everyone. However, I must admit that even though I felt she was justified in her laments, it did become a bit excessive in the story. I would have liked her to concentrate a lot more on the possible destruction of the world. It would have given her character a lot more inner strength.

I give this book 3 stars. I enjoyed the further introduction of the Greek mythology into this story, but found Kate a bit lacking in strength we saw in the previous book. I also warn you of a cliffie at the end. I will be reading the next book because have to know how the story ends. I also I haven't given up on having a strong Kate again.
Tweet