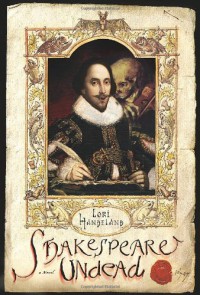 This book takes Shakespeare and makes light of him and his works. So, staunch Shakespearians beware. You must have a sense of humor for this book. The story was a mixture of Shakespeare in Love and paranormal elements. Will is a vampire who has the ability to raise the dead. Kate is someone who was taught to kill zombies from her nanny. Their love story does follow the movie closely and in fact I could see many of the movie elements I recognized in my head. Actually, that sort of made it fun for me.

The parts I didn't care for in the book was the mixture of language. Will would speak in his poetic form but would often suddenly switch to "normal" speech. There was also a back and forth POV between Will and Kate and sometimes it was jarring as you would forget who was speaking for a minute. I had to reread some chapters over because of this. My last complaint is the mixture of contemporary film within his play ideas. It just didn't make sense to me, but I did see where the author was going with those segments. However, I feel it would have been best to have stuck with the plays he wrote at this time.

I give this book 3 stars. Despite my complaints I still found it entertaining. If nothing else, it did make me want to see Shakespeare in Love again. At least this one has a better ending!
Tweet