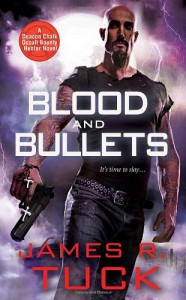 This book is a gritty urban fantasy. As the title suggests, it does not skimp on the blood or the bullets either. There is gore, but a lot less than most zombie books. Most of the vamps go "poof" when they are killed like in the Buffy tv show. So I see a lot of vacuuming in the future of these characters. ;) Sorry, but my brain goes there when they keep talking about the dust the vamps leave behind.

It is told in a long narrative reminiscent of those old detective stories. I don't love this style as it always seems to keep me at arms distance from the character. However, I didn't hate it either. The book also has a raw edge to it I think a lot of males would appreciate. I think this would be a great book for those trying to get the males in their lives to read a bit more. And even though I see this appealing to males a bit more, the main character, Deacon Chalk is not without emotive capabilities. In fact he is quite emotional and it is to the character's benefit. It brings a lot of humanity to his character.

I should also mention a bit about the secondary characters. I knew that I would like Kat and Father Mulchy his "partners" in vampire hunting, but I was surprised that I really liked Larson and Tiffany. Two characters that had the earmarks of being annoying, but ended up being anything but that. There is also a werespider. Yep... spider. The only one in existence that I could deal with but at the same time never be in a room with (sorry... phobia *points at self*). I couldn't believe I really liked her. :)

I give this book 3 1/2 stars. It's a nice introduction to the series that really does put you at the edge of your seat especially toward the end. I can really see Deacon's character get more complex as the series evolves. Oh and those who love the genre of vampires will love a few sentences giving homage to characters you will recognize. Yep, this author did his homework. :)
Tweet