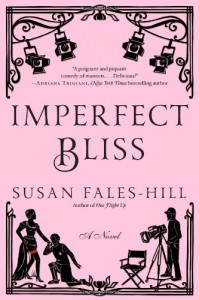 I have to admit I was a bit worried I wouldn't like this one because of the reality tv angle, but still wanted to give it a try since it was supposed to be a retelling of Pride and Prejudice. I did see many of the similarities within the characters as it contrasted those within Jane Austen's novel, but it was a story of it's own. I also didn't mind the reality show angle as it brought to the surface "selling" oneself in marriage as Jane felt in the original. I thought it was a cleaver way of doing just that.

I loved the fact that Bliss's family was of mixed race and dealt with all types of prejudice. Even the kind we direct at ourselves. That in itself really makes the book for me, more so than the relationships within the book. In fact, that brings me to my biggest complaint... the relationships.

If you are looking for an uplifting book about relationships, this may not be your book. Now, don't get me wrong, there is an HEA in that area. Our intrepid "Darcy" known as Dario and Bliss are perfect in that regard and so is Victoria with her mate (I don't want to spoil who that was, but I did love the twist!). However, the rest is full of cheaters, gold diggers, and liars. It sort of makes you wonder if love really exists in this book's world. The ending does give you hope, but after so much, I think I just needed a bit more.

I give this book 3 stars. It's a good retelling of Pride and Prejudice and I have to say I love the way the author brings it into the contemporary scene. I suggest this book for those that love these sorts of retellings as well as those who enjoy chick-lit.
Tweet