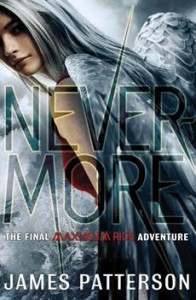 The last book in the series and hopefully all the answers are finally given. Will Max finally save the world? Will the flock be together? Well, yes, those things are answered... well, the first is sort of answered, but the second question is fulfilled. As is who Max choses in the love triangle in which I was never a fan. Nope, not going to reveal those answers, but I will talk about the general plot.

I have to say this was back with the first book, but yet, still had those pesky plot holes that were never filled. In fact, although I thought this one was better edited than some of the most recent books in the series, there were still some minor problems. One was Akila. Um... she was a Malemute and not a Samoyed. Big difference in size an attitude (okay, I might be one of the few to know that right away, but still...). The others were the explanations that never quite took, the fact that their benefactor was never really vetted, and that some of the whys weren't explained. Yes, this one will give you some of those answers, but leave several of those that were created within this series just fluttering.

I also had problems with the big climatic ending. What were the bad guys motivation. Yes, we got... save the world from the humans, but then why were they trying to always destroy the flock? Were they the true terror? Was there more to it (I can't explain that one further w/o spoilage)? How would they know that? Who knew that? What did her mother know? Jeb (we get a partial answer, but not what I thought was a full one)? Ah way too many questions, too little answers.

I give this book 3 stars. While I think it was a pretty decent conclusion to the series despite my questions, and that was mostly because of the interaction of the flock. I still liked the way they interacted despite me thinking Fang was a jerk more than once. I would still recommend this book to MG readers who just want to be entertained and not think too much about what gets dropped and what makes sense. The action and adventure was fun.
Tweet