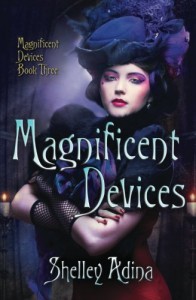 I read and reviewed book #1 in this trilogy, Lady of Devices, when I did Steampunk week last year (it was only last year? I swear that was longer...). I had bought that book for myself and was very pleased with how it was written. Unfortunately I wasn't able to read the second book (you book bloggers know why that happens...) but was contacted to read the third in the series. I was hesitant to pick it up since I haven't read the second (I do plan on correcting that) but was assured that I could dive into this one without worry. So, those of you who know me... I took the plunge.

It did help that I read the first. As I was reintroduced to many of the characters, I was reminded of the quirky kids Lady Claire became introduced in the first book. And although I did feel like I was missing pieces of the puzzle, they weren't key pieces as I was able to really be fully engaged within the book. It is also a short book, but by no means without adventure. You are on an adventure from almost the start.

What I loved about this book and the book before were the characters. Even a chicken becomes part of the story and has a personality of her own. I think it was a fun addition to the characters although at times it might have gotten in the way. Not too much, but I would have missed it if it was left out. I just adored Rosie the chicken. The kids are also so ornery you can't help but love them. Definitely having a mind of their own, they take over the story and really bring life to the tale. Anyone who hates these kids becomes an instant enemy and anyone who loves them an instant friend. You had no doubt when that happened.

My biggest complaint was a small scene with what I assumed was a mountain lion. It was a personal niggle that wouldn't have happened in the way described. It really was the only part I didn't like. My second criticism is about the ending. It was too open. Not a cliffie, per se... but was open for another book in the series. The title reads trilogy, but NO! I have to know what happens! What is next. Not everything felt complete and I hope it goes on... perhaps planned in another way so the trilogy can be kept but a side series is born. One can hope.

I give this book 4 stars. It was a fun short book that I hope continues with the tale. I'll be getting that second book shortly and fill in the things that I became curious about.
Tweet