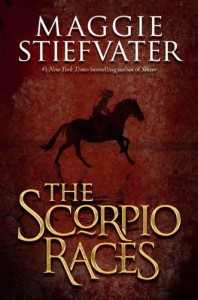 In the beginning of this story, it was quite slow. In fact, I had a hard time really getting into the flow of the book. At first, I thought it was the narrators Steve West (reading Sean's chapters) and Fiona Hardingham (reading Puck's chapters). Not because they were bad, but because they had a very smooth voice quality... especially Steve West. I thought maybe it was the cadence of their voices that sort of lulled me. However, the story wasn't just taking me away.

There was a twist. Not a huge one, but it, for some reason, really ramped up my attention. After that, I was able to really see Puck and Sean both struggling with their respective problems and I became entranced. Not only that, it was the beginning of me becoming increasingly tense about the race coming up shortly. A race that started to seem like it would take a year to get here.

Now feeling like it was a year might not sound like a good thing, but it really was. It was the anticipation, the want to hurry up and get it over along side the same feeling of wanting it to last. Not wanting to leave this world too quickly. So, I became increasingly anxious as to what was going to happen. Oh but Maggie Stiefvater doesn't just leave you at that building anticipation. She throws in other anxiety producing incidences that makes you find yourself at the edge of your seat. It also enhances the anxiety already going on.

I should say something about the romance because I really enjoyed it here. There is one and it proceeds gloriously slow. Gloriously? Oh yes... It makes sense with who Puck and Sean have become and are becoming. It cannot be any faster or it would have played false. No insta-love here. And it's a perfect build of emotions. One that takes into account each person's world not made easy by their respective circumstances.

Oh the ending! So many questions leading up to the ending... Will I get my HEA? Will something worse that what is going through my head will happen? Who will die? Will I be able to get my hands through this story and pluck Mutt Malvern out and kick him in the arse? Will "I" survive this ending?

Ah... the end. All I will say is that it was satisfying even though this is one book I would have love to have ended with a epilogue so I know what happened to all the remaining characters years later. No, it's not necessary to the book's ending, I just my want to know since I'm now invested in this world.

I give this book 4 1/2 stars. It has a slow beginning but stick with it, the rewards will pay themselves off ten fold. You may also like the audio. If nothing, you will enjoy the two narrator's British accents. :)
Tweet