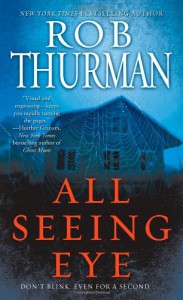 Jackson's story is the background to this mystery. It starts with how he got his powers of psychometry and how he deals with it in his life. The way the story of his life unfolds is a bit different than what we are used to in these stories. Instead of having it laid out before us, we are often playing catch-up, but nothing is missed. Even though there were times you knew you were missing information, you knew it was coming since this book is not part of a series. I actually enjoyed the way information was doled out. Made you pay attention.

There are more than one murder mystery within this thriller book. A lot of twists and turns within trying to solve it and also trying to figure out who to trust and who to not. I found the twists easily solved, but it did not deter my enjoyment of the tale. I found the journey even more entertaining than solving those twists. I also enjoyed the characters in this book. Especially Jackson, the good anti-hero with a lot of snark who will worm his way into your heart... eventually. :) I really enjoyed Jackson.

The ending of this book was probably my favorite part of this book. I won't spoil a thing, but it was quite satisfying and exactly what I wanted to "see". I would recommend the book on the basis of that ending. I also give this book 4 1/2 stars. It's an entertaining read especially for those that like mystery and thrillers.
Tweet