A Breath of Frost 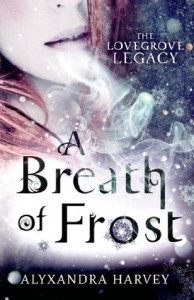 This is the story of 3 cousins who come into their witching powers when a binding spell is broken. They didn't even know that magic or witches even existed. They are all suddenly thrown into a unknown world. It is also the story of Emma in particular. She is the reason the powers have been bind, but not why. It is Emma's exploration of who she is and who she is to become is the focus of this edition.

I have to say that while I loved the premise of this story, I was frustrated a bit with the beginning. Granted, our knowledge of this world came with what Emma learned. However, some of the adventure was purposely muddled and that is what frustrated me. Emma and her cousins were warned about the Keepers and those that uphold magical law, but not why. In fact, they seem like they may be the "good guys" even if they are a bit too strict and set in their ways. I get that any entity that does not listen may not be trusted, but it seems as if "the Order" was all powerful and yet at the same time completely weak. It just wasn't clear from my perspective. However, once Emma actually started "working" with the Order in a finishing school designed to help her learn her powers, it was a bit less frustrating. In this way, the Order seemed to be more in the background. However, in the end when the Order became more dominant in the story it became a bit more muddled once again.

The main and secondary characters in this book did shine, however. It was the reason that kept me going and kept my interest. Emma's character is interesting and I do hope they keep her as a focus for a few more series books. I also enjoyed Daphne, Emma's nemesis. She wasn't one dimensional as some of these characters can be made and so I would also love to dive more into her character as the books go on. There is also potential with Moira and "outlaw" witch who is more like a street urchin with power. Yes, several interesting characters in this book.

I give this book 3 1/2 stars. I recommend it for the characters and I really can't wait to see if those secondary characters get even more fleshed out.
Tweet