The Double Life of Incorporate Things 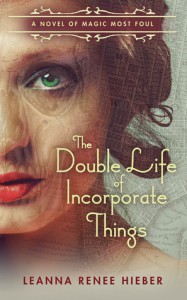 This is the final installment of the Magic Most Foul Trilogy. In this one we are dealing with a new horror, a chemical which changes personality into something monstrous. If I'm not mistaken, I'd say that was a nod to Dr. Jeckle and Mr. Hyde. This time the problem doesn't take center stage for long and we end up dealing with all 3 horrors at once. It's up to Natalie and Jonathon and their connection to save the day.

I enjoyed this final book. I really liked that Natalie was seen as a strong woman who had come into her own. She looks back and sees how much her father sacrificed for her and how much he loves her through his action and what she thought was inaction. The growth of her character really spoke to her strength. Unfortunately, there was a time a little later where she seemed to turn into a whining child where there were important things to consider and lives on the line. Fortunately that doesn't last for more than a few paragraphs.

Jonathon is much less evolved but it is easy to forgive him as we are reminded of everything he has gone though in such a short time. He has had very little time to process the whole thing so while we could be upset with his behavior from time to time, it was easy to forgive. Especially when he is there when he is most needed.

My biggest complaint is a small one. There seemed to be instances where the initial demon we discovered with the main characters was making a comeback. He seemed to be at the forefront and at the crux of the next battle. He was not seen again after making a big threat to Natalie. Although he could be seen as representing the demons as a whole, it still might have been interesting to have it come full circle with the same demon. Still, I just didn't quite understand why that character was dropped so suddenly.

I give this book 4 stars. It ends with a twist I didn't see coming. This book also seems to evolve around equality for women and those of color and other religious backgrounds. The other books dealt with it as well, but this book seemed to want to drive the point home. I recommend this to people who enjoy a good dark gothic tale.
Tweet