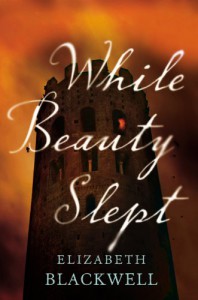 This is a retelling of Sleeping Beauty (the Disney version). However, this is a bit different than the retellings we are used to getting. Usually there is a mix of what kind of magic or in a different magical place, however, this retelling is a "what if" kind. What if there was a real historical story behind Sleeping Beauty? What if all the magic is taken out of it and was substituted with real life historical problems?

We see this story through the eyes of Elise a girl who was raised on a farm but later went to the castle to make her own fortune. We follow her trials and her growth into a powerful woman. She was favored by the queen and in her journey became a lady in waiting. We also see everything about the royals through her eyes. The witch, who did seem to have magical powers-- but was really the power of suggestion and ambition mixed with a bit of insanity-- was really the king's own sister denied the throne because she was a woman. There was a curse and a bid for power, but it all happened within the confines of a historical setting.

There are times in which we would be brought out of the story by Elsie to remind us that it is a recollection. This was strategically done to amp up our anxiety at the outcome. The reminding is made to keep you at the edge of your seat waiting for the final battle you know would be gruesome and harsh. The final battle did not disappoint.

There is a twist at the end and one I enjoyed. It isn't completely a wondrous HEA, but one that satisfies and makes sense. I recommend this book to those that love historical fiction or retellings. For those that don't typically like retellings, this one might be the one to try since it is set more as historical fiction. I give the book 4 stars.
Tweet