The Tropic of Serpents 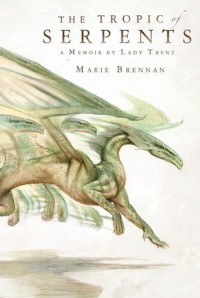 I reviewed the first book, A Natural History of Dragons and was surprised at the story within. I totally admit I was drawn to that first volume primarily because of the illustrations in the book. This book also has illustrations from the same artist, Todd Lockwood. Even though they are fewer in number, they are no less spectacular in this volume as well.

In this story again the fascination is with dragons and how to properly study them. The preservation of dragon bone is not only of scientific importance but one that may decimate the dragon population. This was discussed a lot within the group, but still they went ahead with the expedition and preservation. I was curious as to why it wasn't abandoned (other than scientific curiosity) because none of them wanted the dragons to become extinct. Still, this reason did give their group background and financial backing to go in search of dragons and learn more about them.

The story also has a decidedly fantasy flair to it and some people might be a bit confused as to where these things are in the world. If you realize that her world isn't ours and that the names to the countries and groups of people don't belong us... you sort of get used to who is who and where things are in relation to another. In a way, learning a new language set in this world. It does not take long to get used to things. It does seem somewhat familiar, however, since there are similarities to those in Victorian times and sensibilities.

I give this book 4 stars. It's a interesting venture into lands unknown and learning about dragons as if they were real. I really enjoyed her adventure, but didn't really enjoy the political aspects to the story at the beginning. However, that aspect grew on me and I think the political parts help to make parts of her adventure make sense and why she was accepted into various cultures. It also gave a great background to the ending. You also could read this book as a standalone, but I would suggest you get the first volume to find out where her fascination started as well as the great illustrations in the first book.
Tweet