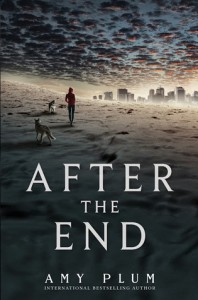 I was actually expecting a dystopian but that isn't what I got. I am NOT disappointed at all though! :) In this book we follow two alternating POVs of Juneau and Miles. While this isn't my favorite way of reading a book, it seems to really work here. Juneau she lives in a secluded area of Alaska being told they are the few survivors of a war that happened 1983. When her clan is kidnapped while she was off hunting, Juneau has to set forth in the land unknown and finds that there was no war. Now she has to find out what happened to her clan as well as what is the truth and what are lies.

Miles is a spoiled rich kid who is used to getting his way. In his defense he does it to get what little attention he can from his father. His father is ruthless in the ways of business and also in the way he handles his son. He seeks Juneau because he believes she has some secret he can exploit for his business. Miles sets out to capture Juneau to prove to his father he is trustworthy. When he catches up with Juneau he also sets out on his own journey to find out who he wants to be as well as what is truth and what are lies that he believed his whole life.

This book has a magical quality about it which reminds me a bit of the magical realism genre. What really captured me here was their dual journey to strip off what they have been told and to find out for themselves what they truly believe and who they want to become. This is the part that captured me to the point I didn't want to put down the book. The pages flew by...

There were still things I wanted to know like I would in any good story. Would love to have more background, especially of Juneau, but I feel like we will get more of those answers as the series moves on. In fact, you are left with more questions than answers when the book ends. And yes... warning... there is a major cliffie in the end. :(

I give this book 4 1/2 stars. That cliffie will kill you if you are like me and hate them, but you will love the developing romance between the characters. No insta-love here. :) I recommend it to those that love a good adventure with a bit of magic thrown in.
Tweet