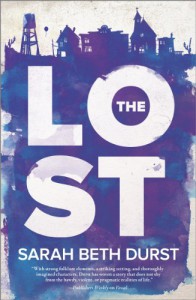 This is a story about a woman who wants to run away from her life and gets her wish. She finds her self in Lost a place where lost things are found. It is also a place where you find what you lost. This is essential since you cannot leave until you find it. In a way this was a retelling of a mix of Alice in Wonderland, The Wizard of Oz and Peter Pan. The reference to Peter Pan is quite evident with the Finder being named Peter, but then again, that may just be a personna he adopted.

I really enjoyed these characters. Granted at first it took a bit of getting used to because so many of them seemed crazy. Still, as Lauren starts to find some semblance of sanity within the insanity certain characters start to really grow on you. I was a bit concerned at first since even though Peter really grew on me, you didn't get to know him well. Ms. Durst does not often write series books, but standalones so I thought I wouldn't get more Peter when I realized at the end that this is a series. So relieved since I really want to know more about this character. Luckily, Lauren, our heroine, feels the same way.

I give this book 4 stars. It's a strange turn to a strange town but it holds a lot of promise to what new adventure will come. I personally can't wait for the next installment, The Missing, slated for later this year. I recommend this book to those that enjoy retellings and renewed chances at life. It is an adult book, but can be read by all.
Tweet