Forged: The World of Nightwalkers 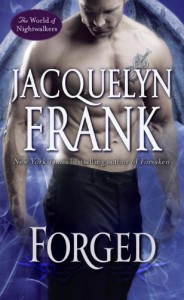 Yes, I did it again. I started a series in the middle. I did read the blurb which said a new paranormal so I really thought I was starting at the beginning. However, like a lot of PNR, I was not lost and any background information was provided that I needed.

I have to say that at first I didn't like either character. In fact taking the book as a whole the characterization felt very uneven. At first, Ahnvil was abusive and a jerk to Kat who was trying to save his life. Kat, in turn, kept instantly forgiving him without cause and actually was instantly attracted to him. Later there was an excuse for his behavior (the healing process kicked in some nasty behavior) and she finally told him where to take his attitude. He also started treating her with respect and she starting getting an attitude (which was a good thing). However, both behaviors seemed to come out of the blue. Even so, I did start to enjoy the story when this started happening.

The part about Kat learning about herself and the adventure that came with it was very interesting. Unfortunately we don't get too much of it. I would have almost like it to start at the point where she was learning about herself (well, with a little background or it wouldn't have made sense) and then continue with the story arc that is going throughout the series.

I give it a 3 since I do think that the series might be better on the whole and I'm and ending girl. Despite the ending feeling "short" (like it was just getting started and then it ended) I did like it better than the beginning. I do recommend this series for those that like PNR. I have a feeling those that are attracted to PNR much more than I am will really enjoy this series.
Tweet